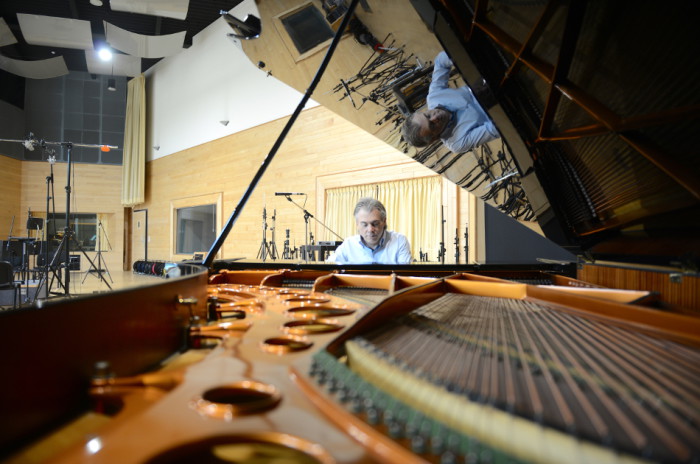 In Part 1 of our interview with Wilfried Van Baelen, we covered many aspects of his ground breaking company Auro Technologies. In Part 2 we continue the theme, discussing the challenges of bringing true 3D-sound to the Home Theatre and Automobile industries, and we learn about the incredible studio complex, Galaxy Studios.

Many effort and research has already been carried out to try and recreate 5.1 Surround sound with speakers only positioned in the front, but the results are very poor. This is because it can only be achieved by using psycho-acoustic effects, which badly influences the sound quality, and creates an extremely small sweet spot. This challenge will be even bigger in 3D audio, since source sounds from above are much harder to reproduce by not having speakers located there.

Everybody is convinced that adding the height layer all around the listener is the way to create a completely new immersive audio experience, and of course people try to do it with the minimum amount of effort and investment, and that’s exactly what the Auro-3D® format is about. But we will not compromise this great experience with less efficient solutions, which will never come close to a similar sound, as this would be a lie.

I can only imagine what a musical album would sound like in your Auro-3D® format. Have many bands have shown interest in recording in this format, and how ‘natural’ does the end product sound compared to that of a 2.0, or 5.1 Surround mix?

Currently more than 200 albums have been recorded in the Auro 8.0, or Auro 9.1 format, only a few of them in the Auro 10.1 format which combines the third layer (Top Layer, or sometimes called the “Voice of God” channel) directly above the listener. But since human beings are less sensitive for sounds coming from above, the top layer is almost only useful for fly-overs, or certain special effects, not immediately necessary in music. Even the reproduction of music recorded in reverberant areas like live concerts do not require the Top Layer because there are less reflections coming from there, even in a church when recording classical music. So the Auro 9.1 format is ideal for music in immersive sound. The genres recorded in these 200 albums include not only classical music, but everything from, Jazz, Pop, Rock, and even Dance.

The Auro 9.1 system with its unique Height Layer in front and all around the listener allows for completely new creative possibilities for listeners to be immersed, which creates a much closer emotional connection to music in all genres. The result cannot be compared to Stereo or 5.1 Surround mixes. I very often hear people saying “This is how music has to sound” or “This is what Surround-sound was meant to be like”. Many years ago I received a lot of scepticism about music in 5.1 Surround sound, because it did not sound really natural. But now with Auro-3D® it is just the opposite, everybody who hears it is so surprised about the emotional impact that they want to immediately start producing in the Auro 9.1 format. Morten Lindberg, 15x Grammy nominated engineer for best Surround sound productions, stated: “The difference between Surround 5.1 and Auro 9.1 is much bigger than the difference between Stereo and Surround Sound… suddenly it all feels so natural using the Auro-3D® listening formats”.

“The Auro 9.1 system with its unique Height Layer in front and all around the listener allows for completely new creative possibilities for listeners to be immersed, which creates a much closer emotional connection to music in all genres.”

Has there been any effort to improve the sweet spot area of a cinema within this technology, particularly for film goers seated towards the edge of isles?

That’s exactly what the Auro-3D® format does. By adding the second layer (Height Layer), the sweet spot is enlarged compared with the 5.1 or 7.1 Surround formats. Additionally, the Mono TOP layer gives the same overhead experience for each seat in the theatre. This is different when using a Stereo overhead like our competitors, which again makes the sweet spot smaller. Having the Height layer around the audience does not require a Stereo overhead.

After news of virtual reality (VR) headsets from both Facebook purchased Oculus Rift, and Sony’s Project Morpheus, it looks like VR headsets are going to be the future of personalised entertainment. How does Auro Technologies hope to integrate with such technologies?

Bringing “Immersive Sound” into the car and home

You had your first Auro-3D® Integrated 3D-Sound Home Theatre receiver the ‘Auro-3D® Auriga™’ (the world’s first true 3D Audio receiver) launched at High-End Munich, which are now deliverable to consumers. You must be excited about bringing your technology from the professional market and into the consumer market.

Yes, after being the first with true 3-Dimensional sound for professional cinema, we are also first in home theatre. The Auriga™ was released worldwide in May; it is a milestone in history. We worked very hard for several years on the development, and the result is an amazing, top quality product. The processor has 16 output channels of which 13x 200w are amplified, fantastic DAC converters, a menu that is really intuitive to navigate; it really is a fantastic product! And everything is inside; the Auro-3D® Engine is inside, which includes Auro-3D® native playback, as well as the up-mixing engine (Auro-Matic®) which is transforming all Mono, Stereo, or 5.1 content into an immersive experience. The Auriga™ is a very strong device.

We also have 2 additional products that will be launched shortly, the Auro-3D® Mensa™, and the Auro-3D® Crux™. Furthermore, many companies are turning to us to integrate Auro-3D® into their own range of products. This is an exciting time and we can’t wait for people to experience the incredible sound of Auro-3D® in the comfort of their own home.

With the addition of extra speakers, does this at all change the room requirements for the system compared to that of a 5.1 or 7.1 system?

No, the requirements of the room for an Auro-3D® system are the same as 5.1 and 7.1 systems. The point is of course that if a room is very reverberant and reflective, then the human hearing system can become confused and it sounds less natural, so it is always better to have controlled acoustics. In a typical house you usually have drapes, carpet, couches, furniture etc… These are already good natural sound absorbers. One thing you have trouble containing are the low frequencies, but with a little acoustical treatment you can make a good difference, it is not difficult. We have tested the system in so many different environments: Low ceiling, high ceiling, wet rooms, dry rooms, and it works everywhere. Auro-3D® is a very versatile system.

Another big market for Auro Technologies is the Automobile industry. With the amount of time people spend listening to music or the radio in cars, it’s really exciting to see true 3D sound being brought into this market. What kind of issues has your company come across integrating with the Automobile industry?

Because of the positioning of the speakers, the manufacturers needed to change their car frame specifications as to not compromise the safety and strength of the car. So a lot of testing was undertaken, it took a few years of testing to make sure the cars strength integrity remained unchanged with the introduction of our Auro-3D® systems.

We cannot yet specify which manufacturers will be implementing our Auro-3D® systems, but the first will be from Germany, with the first car released to the market in 2015. We also have a lot of interest from other car manufacturers worldwide, so this is a large market for Auro Technologies. The major company, Continental, having a large worldwide share in electronics for cars recently became our partner for bringing the Auro-3D® experience into many more cars.

Another fantastic advantage of the Auro-3D® system in your car is the addition of our up-mixing Auro-Matic® plugin. Stereo or even Mono signals become radically enhanced, providing a much more enjoyable listening experience for content which was not produced in the Auro-3D® format. The additional height layer of speakers around the listener, which is unique to the Auro-3D® format also enlarges the sweet spot of the car, and this is important as the driver is never sitting in the middle of the car where the speakers are focused, they are always to the side.

Galaxy Studios and the Future

Your Galaxy studios look and sound incredible, a real feat of human ingenuity and engineering. Has anyone actually tried to shoot a bazooka through the 11cm thick “Bazooka proof” glass?

No, nobody has tried to, but we did fire a starting pistol, which produces ear damaging sound levels above 120 dB which could not be heard on the other side of the windows. It really is an amazing experience seeing an orchestra playing triple forte in front of you on a distance of less than 1 meter, and having no rumble or any sound on the other side of those crystal clear windows. But that’s not the only record breaking performance. Each bunker is supported by metal springs with a resonance frequency lower than 3 Hertz, having isolation between each bunker of more than 100 dB, with an Airco system that cannot be measured by musical microphones. It is as far as I know, the most advanced studio complex on the planet which was built 20 years ago, and all the measured records are still to be improved upon.

“It really is an amazing experience seeing an orchestra playing triple forte in front of you on a distance of less than 1 meter, and having no rumble or any sound on the other side of those crystal clear windows.”

We just recently tripled the size of the building based on the same acoustical principals. The AuroTorium, which is a reference screening room (4K – 3D – High Frame Rate) and a reference mixing room (Ams-Neve DFC, Avid, Meyer Sound) built with the best possible acoustics realized together with Concept-A Acoustics (Munich) is the first expansion of the new building. We will soon open 6 new Sound Design rooms in Auro-3D®, a Foley stage with enough height and variable acoustics that allows ideal recordings with 3D reflections from dry to wet large rooms, and of course a further expansion of our 4K DI workflow which we installed as one of the first in Europe back in 2006.

Additionally, near Galaxy Studios, we have financing company called “Mollywood” (Galaxy Studios is located in the city Mol, only one hour from Brussels, the capital of Europe) as well as a production company called “Zilvermeer”. So we typically do co-productions; last year we were nominated for an Oscar for best short film, and another film was top selection at Cannes.

That concludes part 2 of the interview with Wilfried.

To find out more information about Auro Technologies and its products and developments, you can find them through the subsequent channels: